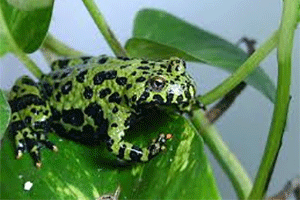 A firebelly spends most of his time upright, alert, and looking around for crickets. 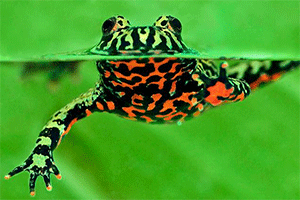 Firebellies are indigenous to parts of Asia, including Thailand, Korea, and parts of China. In the United States they are popular as pets. 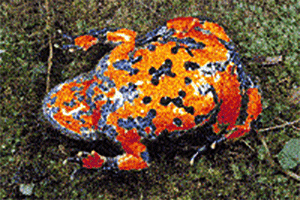 When unable to jump or swim away from danger, a firebelly rolls onto his back, puffs up his fire-red belly, and secretes a toxic milky liquid.

Adult males and females are similar in appearance and size, about 2 to 2.5 inches in length. Determining sex is best done by noting a firebelly’s behavior since only the male makes sounds. When looking for a mate the male will be the one jumping onto the back of other toads. (If he jumps on another male, the mistaken firebelly will let out a special croak.)

The female lays 40-100 eggs, which she attaches these to plants near the water’s edge. In a few days the eggs hatch. The tiny tadpoles are sustained by absorbing the remains of the their yolk sacs. In about a week, they begin to move about and eat tidbits of food floating in the water. Around 6-8 weeks, rear legs and lungs begin to develop. At 8-14 weeks, the tadpoles’ tails start to absorb into their bodies and the tiny amphibians crawl onto the land and look for food.

A firebelly cannot extend his tongue, which means he must be very close to his prey in order to catch it. Since the firebelly can only see a bug when it is moving, he will remain still until he sees an enticing movement and then jump or crawl in the direction of motion. Getting close enough may take a long time, especially if the bug only moves occasionally.

When a firebelly has found just the right position, he will wait for one last wiggle of an antennae or flick of a leg, and then lunge at his prey with his whole body. If he is successful in grabbing the insect, he will use his front feet to stuff the bug into his mouth and have a delicious meal.

Firebelly: a journey into the heart of thinking

If you would like to read a story about a frog who has the choice between a comfortable life as a pet and an adventurous life in the wild, you will also discover ideas that has caught the imagination of readers around the world.